Slavs and Tatars: "Pulling a Thread to Undo the Sweater"

Slavs and Tatars are a special collective in the art world. They are Berlin-based, yet travel the world from museums to galleries, using openings as opportunities to discuss future projects. Since 2006, their core mission is to challenge the Western perception of Eurasia: a vast region they refer to as "East of the Berlin Wall and West of the Great Wall." This land is home to the Slavs, the Russians, the Arabs, the Iranians, the Caucasians, the Turks, the Tatars, the Mongolians, the Chinese, and a myriad of smaller communities in-between. Perhaps without planning it, the collective- who has personal roots in this region - have become its art world ambassadors, representing academic research on German Orientalism or ethnographic research Molla Nasreddin to the audiences of major European and American museums. By having access to primary sources and on-the-ground connections and removing the dust off of obscure histories, they managed to elevate social fabrics and dialects that are, by essence, 'local' by using the global tool of irony. The result: sumptuous installations, well-researched books, cheeky posters, and thought-provoking lectures, which bridge gaps between localities and periods which would have otherwise not interacted. Educating their audience might not be their primary goal, but will surely become their legacy as Slavs and Tatars continue their oeuvre.

We had the pleasure to sit down with them, virtually, to discuss exhibitions, books, and favorite cities.

Sophie Arni: In your work, you explore a myriad of issues but keep a geographical continuity: you’re interested in the vast region “East of the Berlin Wall and West of the Great Wall.” You exhibited and lectured inside and outside this region, at the Kunsthalle Zurich, NYU Abu Dhabi Art Gallery, and Institute and at Guggenheim in New York City. First question, if you could exhibit your works anywhere, where would your ideal space and location be?

Slavs and Tatars: We prefer to speak about ideal publics rather than spaces or venues. Thus far, the most engaging publics have been in Poland and Turkey. There’s a rare combination of both curiosity and knowledge about the subject matter: our propos are not so foreign, remote or exotic as say in the UK or US. This is pure conjecture, but perhaps what unites these two publics is that discussions about traditions, faith, and others have not been so easily swept under the proverbial Persian rug: these issues are still being debated, warts and all.

S.A.: Slavs represent a large cultural identity shared by much of Eastern Europe. Tatars represent a smaller community, who share Tatar ethnicity and Turkic language and live primarily in Southern Russia and Ukraine. What choose these two terms: ‘Slav’ and ‘Tatar’? Was the point to highlight shared cultural heritage between the Slavs and the Tatars?

S&T: Like much of our work, the name itself is a kind of elastic grain: it contains within its frivolity or silliness, a dense, almost elastic kernel of discourse. Given how much the world has changed in recent years, it’s important to recall the context of 2006, when Slavs and Tatars was founded. Ten new member states had joined the EU and there was lots of hysterical talk about the proverbial Polish plumber, Bulgarian builder, etc allegedly taking jobs from Western Europeans. When many people, especially in the West, hear the words “Slavs and Tatars”, they think of a horde of invaders, à la Braveheart, waiting to rape and plunder. But the choice of “Tatars” in particular reveals a complex constellation, beyond its accurate designation of two distinct peoples (Crimean Tatars and other Tatars). For centuries, it was a catch-all term in European languages to designate those unknown peoples of dark complexion in our region. While Arabs, Turks, Persians, and say Armenians were known ethnicities, “Tatar” was used for various other Caucasian, Central Asian peoples.

S.A.: Using installations, books, and lecture-performances, you deal with the semiotics of alphabets and post-Marxist analysis of late modern Russian, Iranian, Arab histories (amongst other issues). Your practice deals heavily with signs and deciphering the meaning of these signs, but always with a fun yet didactic irony. What do you think about the current wave in curatorial studies to deviate from semiotics, from the cognitive analysis of representation, and move towards the ‘affect’, the emotional response to an artwork?

S&T: It’s a welcome departure from the overbearing emphasis on objectivity and clinical analysis that is the heritage of the Enlightenment. Much of the founding impulse of Slavs and Tatars was to question the unflinching belief in the benefits of the Enlightenment, without considering the blowback: from colonialism to genetically modified produce to splitting dinner bills.

S.A.: Also, can you tell us more about your views on the ex-Soviet bloc? You speak about ex-USSR in your lecture-performance but it is rarely a main point of focus. I can think of one Soviet film, in particular, that really moved me in terms of cultural exchange between Slavs and Arabs: the 1970 White Sun of the Desert (Белое солнце пустыни). Do you have any thoughts to share on the Soviet identity and Slavs & Tatars’ geography’?

S&T: Eurasianism, as articulated by various individuals or groups in Russian history (from early 20th century figures such as Roman Jakobson and Trubetzkoy to Gumilev to today’s more reactionary Alexander Dugin), has always been a fraught concept in so far as it often assumes Russia as the center of the Eurasian landmass. Our interest in Eurasia is one of the margins and rims, as an area of syncretism through and through, meaning a collapse of space and distances. Syncretism implies incorporating foreign ideas or beliefs from other places (intellectually and geographically), but it also implies a collapse of time as those non-native ideas or belief systems are often from another period. Finally, our geographical remit is committed to exploring the radical margins over the rotten center: It is largely Muslim but not the Middle East, largely Russian-speaking but not Russia, and largely in Asia but historically not under Chinese rule (with the exception of Xinjiang).

S.A.: I see your practice as some sort of cultural soft-power diplomacy. You make alternative histories from alternative regions accessible and attractive to a mainstream audience. Do you agree? Or do you view your work as more of archival research for a specialized audience?

S&T: Yes, to a certain extent, we agree. But it’s important to remember that Slavs and Tatars is dedicated to those areas, ideas, beliefs we don’t understand or are not necessarily drawn to. True to our origins as a makeshift book club, we are learning in the process as well: it is not a pedagogical platform. We definitely do not see our work as archival in so far as we don’t work with archives; moreover, archival research implies deference (of our 10 publications only translation of Molla Nasreddin fits this description) whereas we believe one must ‘break’ one’s sources. 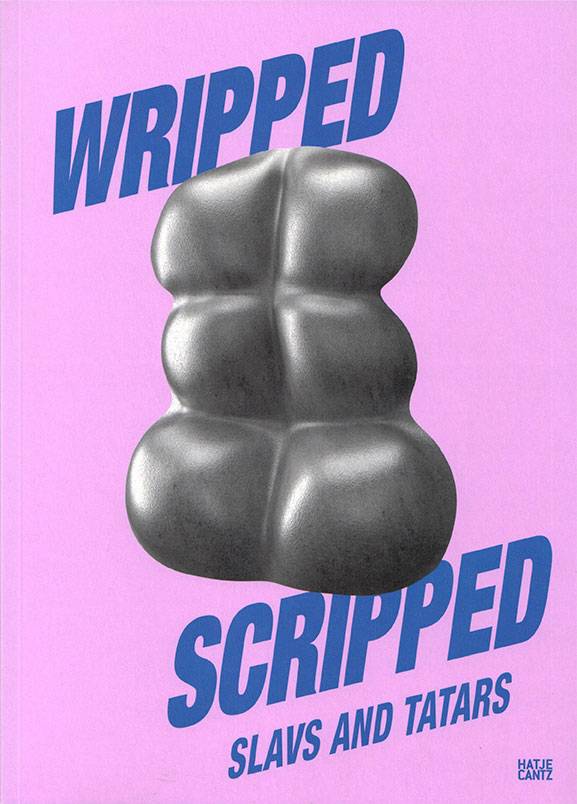 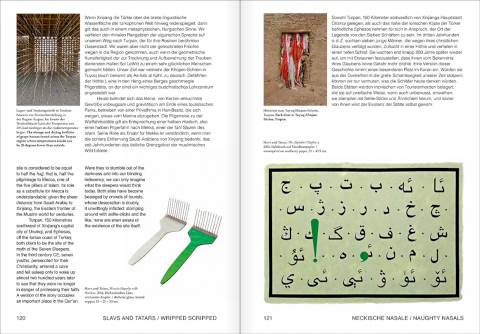 S.A.: You truly stand as an artist-researcher, a new figure in the art world who does the work of an author, of a curator and an artist all at once. I’m curious about your publishing practice. Can you tell us more about the middle ground between publishing books and creating artworks? Do you see the two as the same? Do you see your books as artworks, or keep the books, lecture-performances, and installations separate in your mind?

S&T: The conception of the work is editorial in so far as we work according to research cycles—each roughly three years in duration, and each on a given topic (be it language politics, German orientalism, or medieval advice literature). While the books and lectures articulate a series of concerns, the question becomes, of course, what of the artwork, i.e. sculptures, installations. They cannot illustrate apropos and as such must disarticulate the very concerns above. As in, pulling a thread to undo a sweater.

S.A.: Last question, if you had to pick three, what are Slavs & Tatars’ favorite cities?

About Slavs and Tatars

Slavs and Tatars is an art collective devoted to an area East of the former Berlin Wall and West of the Great Wall of China known as Eurasia. Their practice is based on three activities: exhibitions, books, and lecture-performances. With a heady mix of high and low brow humor, the artists turn to sculptures, installations, and text to excavate and explore geography that is equally imagined as it is political. Since 2006, the collective’s work has been exhibited at major museums and biennials internationally, including Tate Modern, Centre Pompidou, Museum of Modern Art, Warsaw, 10th Sharjah, 8th Berlin, 3rd Thessaloniki, and 9th Gwangju Biennials. Their work has also been the subject of solo exhibitions at the MoMA, New York (2012); Secession, Vienna (2012); Kunsthalle Zurich (2014); Dallas Museum of Art (2014); Institute of Modern Art, Brisbane (2015); and Salt, Istanbul (2017). Slavs and Tatars has published several books: Kidnapping Mountains (Book Works, 2009), Not Moscow Not Mecca (Revolver/Secession, 2012), Khhhhhhh (Mousse/Moravia Gallery, 2012), Friendship of Nations: Polish Shi’ite Showbiz (2nd edition, Bookworks, 2017), as well as their translation of the legendary Azeri satire Molla Nasreddin (now in its 2nd edition with I.B. Tauris). On the occasion of a mid-career survey in 2017, the collective’s first monograph was published by König Books. Slavs and Tatars’ lecture-performances are hosted by leading art spaces and prestigious universities around the globe, including Yale University, Princeton University, the University of Warsaw, and the Royal College of Art, London.

This interview was made possible thanks to the Third Line Gallery. To see more of the artists' works and keep up with their latest projects, make sure to check out Slavs and Tatars' website.